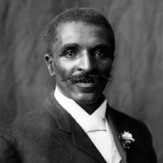 Born into slavery circa 1864, George Washington Carver became one of the nation’s great educators and agricultural researchers. Carver possessed a thirst for knowledge and education that led him from Missouri, through Kansas, to Winterset, Iowa. Friends in Winterset recognized his talents and encouraged him to enroll at Simpson College in Indianola where he studied art and music. Etta Budd, his art instructor, recognized Carver’s horticultural talents and convinced him to pursue a career in scientific agriculture at Iowa State College, where her father was head of the Department of Horticulture.

Through quiet determination and perseverance, Carver became involved in all facets of campus life in Ames: leader in the YMCA and the debate club, trainer for athletic teams, captain of the campus military regiment and dining room employee. His poetry was published in the student newspaper and two of his paintings were exhibited at the 1893 World’s Fair in Chicago. He earned his bachelor’s degree in 1894 and his professor, Dr. Louis Pammel, encouraged him to stay at Iowa State and pursue a graduate degree. Because of his proficiency in plant breeding, he was asked to join the faculty. Carver continued to expand his knowledge and skills, writing professional papers of national acclaim. Upon completing his master’s degree in 1896 he was invited by Booker T. Washington to join the faculty of Alabama’s Tuskegee Institute.

At Tuskegee Carver gained an international reputation in research, teaching and outreach. His teaching stressed the “hands on” approach, as he encouraged poor farmers to diversify and rotate their crops, grow local food crops to nourish their families and develop pride in their farmsteads. His research resulted in the creation of hundreds of products from peanuts, soybeans, and sweet potatoes. Carver’s efforts to utilize organic materials, such as farm products, for industrial applications earned him the title, “the father of chemurgy.”

Carver was awarded numerous honors including the Fellow of the Royal Society in London, Roosevelt Medal, Humanitarian Award from the Variety Clubs of America and Honorary Doctorate degrees from Simpson College, University of Rochester and Iowa State University. Landmarks across the nation have been named in honor of Carver, including the new George Washington Carver Center on the USDA campus in Beltsville, Maryland. Carver died in 1943 and in honor of his outstanding contributions to society the George Washington Carver National Monument was established at his birthplace of Diamond, Missouri.

While Dr. Carver firmly believed that it was “simply service that measures success,” he has been awarded many honors for his work as both a scientist and humanitarian. These honors include: Fellow of the Royal Society for the Encouragement of the Arts (London, England), Iowa Award, 4-H Intl. Hall of Fame, Agricultural Hall of Fame, Roosevelt Medal, Variety Clubs of America Merit Award, NAACP Spingarn Medal and Honorary Doctorates from Simpson College, Iowa State University, and Selma University. Landmarks across the nation have been named in honor of Carver, including the George Washington Carver Center on the USDA campus in Beltsville, Maryland. Carver died in 1943 and in honor of his outstanding contributions to society the George Washington Carver National Monument was established in his birthplace of Diamond, Missouri.